Are Wear ’em Out pads bulkier than disposables?

When I first switched over to reusable period pads I had a million questions. I was doubtful that they would work, or that I could even really get on board with the concept. I was worried that they’d smell, leak, be difficult to take care of and that they would be bulky.

All of these concerns were justified. However just a short couple of months after making the switch I realised that they don’t smell, they rarely leak (they’re not magic babe), and that they were easy to use.

Then in January 2019 I had an idea. I wanted to bring reusable period pads to the mainstream. A pad that modern, busy people would feel confident and comfortable wearing. I also wanted to help make the switch as seamless as it can be.

As a reusable period pads wearer, I was fully aware of what a reusable pad wearer wants and needs. So, I set about putting that into the design and the fabrics of Wear ’em Out pads.

It’s ALL in the design

Our reusable period pads were ten months in design and testing. During this time we were handpicking fabrics of the highest quality and sourcing a reputable factory in the U.K.

We weren’t shy in saying ‘let’s adjust that’ or ‘let’s try it this way’ and making the adjustments as needed. Focused only on creating a selection of slimline, comfortable, hard-working reusable period pads. Each made with a different combination of fabrics to ensure it performs to the highest standard for the requirement needed. 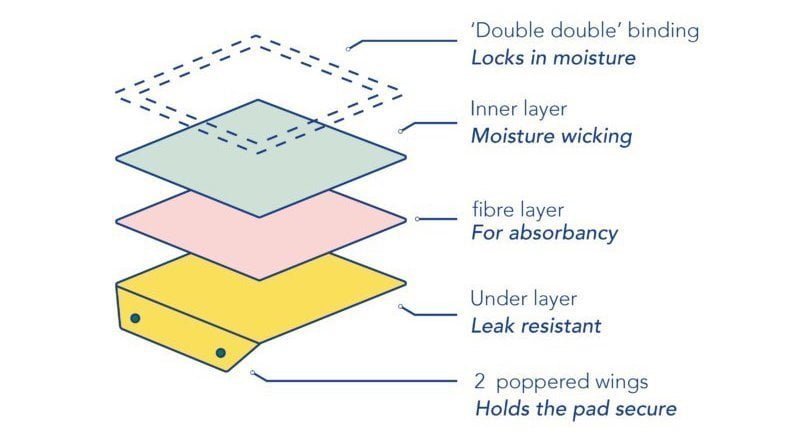 For comfort we added wings with double poppers to minimise any movement in your pants. And breathable fabrics that pull moisture away from your skin and into the pad.

For absorbency we’ve used a different combination of internal fabrics in each of the four pads. This ensures that we maximise the absorbency needed for each of the pads individual jobs whilst keeping their thickness to a minimum. By putting so much thought into the design, we’ve created the slimline pad we set out to achieve. The Mega-Mega Flo and Mega Flo pads are slightly bulkier than the Mini and Medium Flo (you honestly won’t know you’re wearing those ones) as the super absorbent fabrics used inside these are a little thicker but with the extra size comes extra confidence.

And our survey says…

We believe we’ve thought of everything and the reviews we receive back it up. We are proud to say that in one of our recent Surveys, 96.6% of 905 people asked said they find our reusable period pads comfortable to wear!

Reusable period pads created for you

For people who can appreciate a well-crafted design, and a carefully thought out brand that will take them a huge step towards their personal, and our planetary health.

Wear ‘em Out pads are #anewwaytoperiod and we’ve created them all with you in mind. Sign up to receive 10% off your first Order and (sporadic, non spammy) emails with product updates, VIP discounts and a few wise (?) words.

x
We save your email and cart so we can send you reminders - don't email me.
×